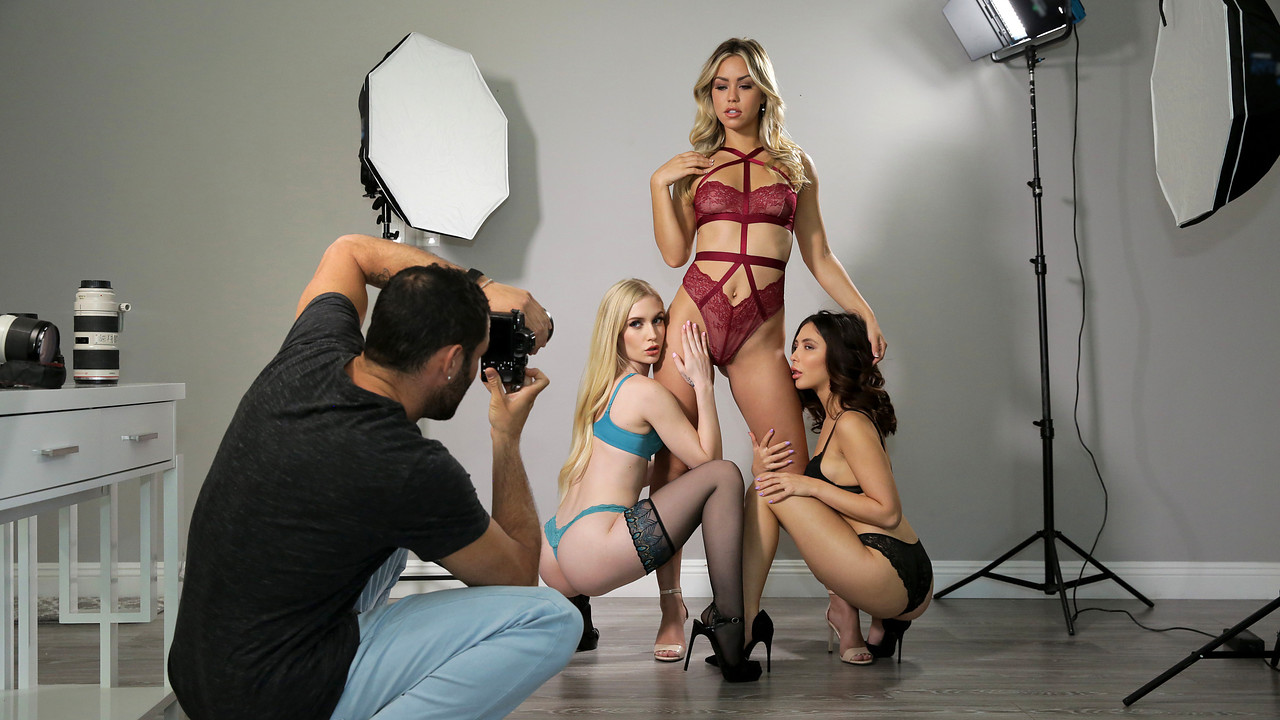 Damon Dice is a professional photographer who has the privilege of working with three stunning models: Alina Lopez, Emma Starletto, and Jane Wilde. The girls are doing a lingerie shoot, which means that Damon gets one hell of an eyeful with every picture. When he's got what he needs from the girls' current outfits, Damon tells the girls to change while he leaves to transfer the pictures to a hard drive. Emma, Alina, and Jane have a different idea, though. They know that today is Damon's birthday, and they've decided among themselves that they're going to give him a gift he'll never forget. They briefly discuss the plan among themselves, then strut into the next room where Damon is doing his thing. He protests that they should be changing, but the girls make it clear that they have something else entirely in mind. They begin their three-lady seduction by peeling one another out of their lingerie, with Damon's assistance of course. Then, Emma and Mary flank Damon on either side of the couch he's sitting on while Alina takes her position between his legs. In between kisses amongst themselves, the girls make sure to pay plenty of attention to Damon's hard cock. Sucking, stroking, and in plenty of ball sucking, the girls make their intentions crystal clear. Damon is no fool: instead of protesting, he slides his hands down to cup Jane's pussy and feel how wet she is. That is just the invitation Jane needs to climb aboard Damon's hardon and start riding him! Meanwhile, Emma climbs on top of Alina to create a lesbian 69 that lets them each enjoy a deep pussy feast. Emma gets to enjoy a stiffie ride next as Damon comes up behind her while she's on her hands and knees. Meanwhile, Alina kneels next to Emma with Jane cuddled up beside her. As Jane watches Damon fuck her friend, she finger bangs Alina. Damon isn't about to leave Alina wanting, though. He disengages from Emma and comes over to give it to Alina from behind as Jane and Emma each masturbate their own greedy twats. Eventually Jane gets another ride from Damon's dick as he gives her a taste of his doggy action. She muffles her cries between Emma's thighs. Alina takes a few moments more to enjoy her own fingers, but soon enough the trio switches things out yet again. Damon finds himself pushed down onto the ground with Emma riding his fuck stick and Alina riding his face. Alina leans forward as Damon eats her out, putting her mouth in the perfect position to eat Jane out at the same time. Damon even helps Alina out with his talented fingers. Next up in the pussy party, the girls link legs as they lay side by side by side on the couch. Damon slides home into Alina's twat first as Alina sucks on Jane's thumb. As they watch Damon fuck their friend, Jane and Emma fondle each other's clits. As he brings Alina off one last time, the girls make it clear that his time to cum has come. They surround him, each contributing to his pleasure with her mouth. As they take turns deep throating Damon's cock, the lovely ladies milk his cum shot out of him so they can enjoy a triple facial right into their open mouths. Cuddling together, they snowball Damon's salty surprise.

It looks like you are using an ad-blocker! Ad blockers may cause some areas of this website to malfunction. Please disable ad blocker and refresh page.